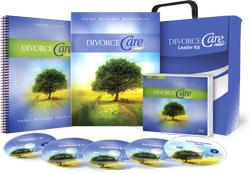 DivorceCare is a divorce recovery support group where you can find help and healing for the hurt of separation and divorce.

In 2013 – after leaving our family home of 33 years, I found myself alone and lost. I had spent so many years trying to keep our marriage together and had become lonelier and more depressed in the marriage. We had tried counselling over the years but just couldn’t seem to get it figured out. It was only then I finally realized I couldn’t do it on my own and turned back to God. I began the healing process and He began opening doors for me to connect with amazing people of God who guided me through the following three years of learning to let go and let God!!! I found a church whose statement was “No Perfect People”. That was me!!! I found the love and support of people who didn’t judge me, didn’t condemn, but walked with me through the journey.

Celebrate Recovery was a big part of that journey. It was there I learned the Principles of Recovery from my hurts, habits and hang-ups, and received honest feedback of the work I needed to do. God also led me to a group of women who were also single, and we began the journey of learning Boundaries, through the great mentorship of Henry Cloud. The next journey was the opportunity to start an Alpha Course at the church. Throughout those three years I developed a passion for taking what I had gone through and learned and helping others who were going through the same thing. In the Fall 2016 , God opened another door, the opportunity to move to Saskatoon. It was not where I had thought I would be, but after the initial fear and thinking no way, he continued to lead me in that direction. So, during Spring 2018, trusting and putting my faith in him and continued to make it clear that this is where I was supposed to be.

In July of 2017, I made the move to Saskatoon. I knew that I wanted to continue to share my journey of healing with others and connect with a support group that would offer the continuing support I needed. God led me to The Neighbourhood Church in the Fall of 2018. It was there I heard the great things that LifeChange and Reconciliation Resources were doing within the community. I finally connected with Jodi in the Spring of 2018, it had been a hard winter of trying to adjust to a new city, connect with people and I was once again experiencing anxiety and a tremendous feeling of loneliness. I reached out to Jodi and I was soon to find out, in her always loving and caring way, she agreed to meet with me on short notice!!! Her amazing love for people and for God were evident to me as soon as we talked on the phone that day.

As we began our conversation, we both realized that Celebrate Recovery and Divorce Care were areas that we both were passionate about. I became involved in the Divorce Care Group that was just starting and quickly found that it was exactly where God wanted me to be. During the spring, Jodi and I continued to explore the idea of starting a Celebrate Recovery Program, it was something we both new was so much needed in the community.

I am excited about what God is doing through this amazing organization with the leadership of Jodi. We will be doing another Divorce Care group, under Hilary, beginning in September. And, we have plans to begin a Celebrate Recovery Program for The Lighthouse residents in the Fall of 2019.

Divorce Care was a blessing in many ways. It helped me through a very tough time in my life. It’s an experience to meet other people and know that they have been blessed by the program.